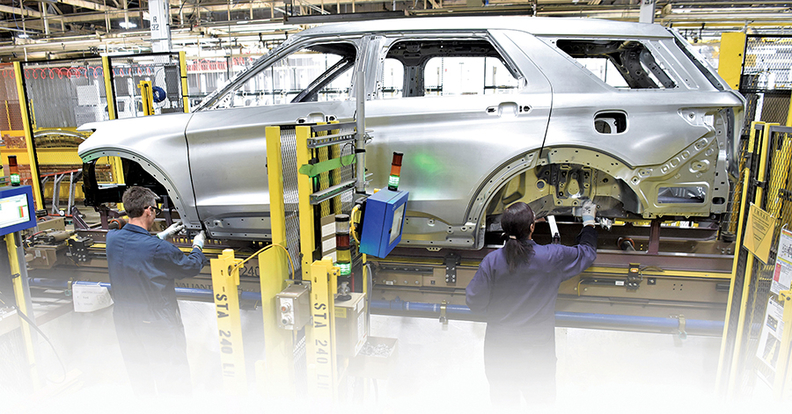 The high-profile changeover of the Ford F-150 plants in Michigan and Missouri in late 2014 to build aluminum-bodied pickups may have been the most important manufacturing endeavor in Ford Motor Co.'s recent history, given the trucks' outsize influence on the automaker's bottom line.

But the scope of that work paled in comparison to the retooling of Ford's Chicago Assembly Plant over the course of 30 days this year in preparation for the redesigned Explorer and the new Lincoln Aviator.

Beginning in March, Ford orchestrated a complex dance of human and machine that transformed most of the 95-year-old plant and its 113-acre site along the Calumet River on the city's South Side. Some 11,000 workers gutted and rebuilt the body shop, modernized the paint shop and upgraded every workstation in the final assembly area.

Every 90 seconds, a synchronized lineup of trucks dropped off loads of scrap metal next to the river. Barges took the metal, weighing more than the Eiffel Tower, to a recycling center a mile away.

Inside the plant, supervisors used stopwatches to clock thousands of GPS-tracked tractor-trailers that hauled in new tooling in a specific order. Officials rented nearby lots to hold the trailers so the tooling would be close by when the time came to install it, rather than storing it farther away and risking getting off schedule because of Chicago's notoriously heavy traffic.

They did it all at a blindingly fast pace. In one area of the body shop, crews tore out old equipment, installed new machines and began building parts within seven days.

"It's the most difficult thing I've been involved in," Gary Johnson, a 30-year-plus Ford veteran appointed head of manufacturing and labor affairs last fall, told Automotive News. "Just the scope, age of the complex and the location of it. This was the ultimate team sport."

Ford CEO Jim Hackett told investors on the company's July earnings call that the Chicago changeover was "in some ways a bigger endeavor" than what happened five years ago at its F-150 plants, even though the company publicized those projects more.

The transformations in Dearborn, Mich., and Kansas City, Mo., focused only on the body shop. At Chicago Assembly, Ford's oldest continuously operating plant, the project included the paint shop and final assembly areas, too.

Ford took advantage of the plant’s location along the river, renting a barge to carry scrap metal.

Installing equipment in 2014 to handle aluminum body panels instead of steel ones was challenging, executives said, but shifting from front- to rear-wheel-drive vehicles in Chicago was more complex.

"The whole process is different," Johnson said. "We changed about 20 to 25 percent of the stations in Dearborn Truck. In Chicago, it was basically about 90 to 95 percent."

The Explorer is Ford's third-best-selling U.S. nameplate, behind the F series and Escape. It's also believed to be one of the most profitable vehicles in the company's lineup. The 2020 Explorer Platinum has a sticker price of more than $60,000 including shipping.

A river runs through it

One of the biggest differences between the F-150 and Explorer changeovers was location.

Although the Dearborn and Chicago sites are near major interstate highways, daily gridlock in the Chicago area made it more difficult to move trucks on a tight deadline.

So Ford decided to take advantage of the location along the river, renting a barge that ultimately carried more than 10,000 tons of scrap metal. Multiple construction cranes worked long hours during the first week to move the metal aboard.

"We knew we were going to have to do this," he said. "We knew the complexity of it. We could plan to the day, to the hour, to the minute."

Once the plant was stripped of old equipment, Ford could lean on its recent experiences at Dearborn Truck, Kansas City Assembly and other plants to quickly install more than 500 truckloads of new machinery.

Ron Ketelhut, who oversaw the Dearborn changeover and is now global director of manufacturing strategy and advanced planning, said Ford learned to build new tooling at off-site supplier shops, then pull it out, load it onto trucks, ship it in order and store it nearby until needed. In Kansas City, for example, the company temporarily parked the trailers at an old amusement park.

Demolition crews made quick work of the interior, preparing for installation of new equipment.

"Not only did it have to be there on time, it had to be in order," Ketelhut said of the Chicago project. "It was like putting Legos together."

To keep the trucks moving, workers prepared extensively by watching videos explaining how to load and unload the trucks most efficiently. Ketelhut likened the sessions to a sports team reviewing film before game day to correct or prevent mistakes.

By the time the changeover was finished, Ford had installed 600 robots, 500 error-proofing tools, several 3D printers and other 3D-printed tools. It also spent $40 million on employee-centered improvements including cafeteria updates and new break rooms.While employees were waiting for new equipment, Ford trained them using augmented and virtual reality so that, when everything was finished, they could become comfortable more quickly.

Hackett, on the second-quarter earnings call, said Ford has its "toughest" changeover out of the way as it prepares to introduce a wave of new and redesigned vehicles over the next year.

The Chicago project ran smoothly for the most part, aside from rainstorms that set it back about four hours. Workers made up the lost time in less than a day, Johnson said.

There were no major injuries or incidents during the construction. The biggest setback, Johnson joked, involved his pride: "I've got a little more gray hair."